When I first told my American friends about mince pies at Christmas, a few years ago, they thought i was talking about meat pies!  Although these delicacies used to be filled with meat, such as lamb, they are now a sweet dish and filled with an assortment of dried fruit, with perhaps a hint of brandy. They are best served warm, in my humble opinion, and here in Devon, we serve them with a dollop of clotted cream. Yummy scrummy! 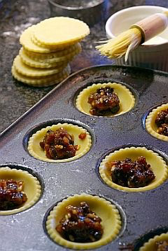 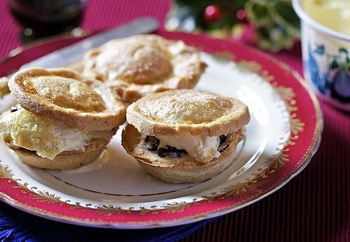 I usually partake of a glass of sherry with mine, to really get me into the Christmas spirit. This is ideal for when you're writing your Christmas Cards or wrapping the presents, with Christmas music playing in the background. 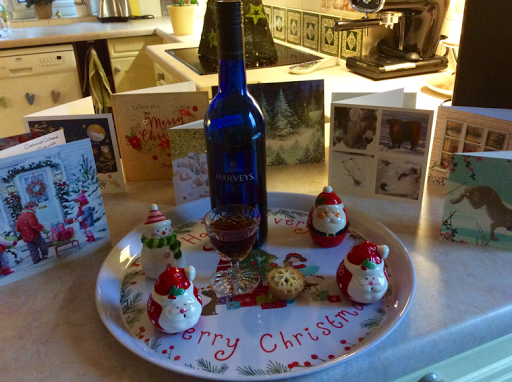 The mince pie in the photo is a tiny bite-sized one, but they are usually larger than that. I have tried all sorts of shop bought ones, but I much prefer the ones I make, using my own pastry. Here in the United Kindom, in the Stuart and Georgian times, mince pies were very much a status symbol at Christmas. Hard for us to imagine that now. Rich people would serve them to their guests in all sorts of different shapes. Having pies like this meant that you were very rich and had truly made it in the world, as you were able to afford the most expensive pastry cooks.
Sometimes, when watching Downton Abbey and period dramas like that, I often think that I would like to have lived in those days, when sherry was served out of decanters and your clothes were all laid out for you. In truth, I fear I would have been the poor little housemaid, getting out of bed at 3.30 in the morning and cleaning out the grates, before the Lord of the Manor  came down for his breakfast in the morning!  Oh well, a girl can dream.
On Christmas Eve, little children over here usually leave out a mince pie and  a glass of brandy, for Santa when he calls, along with a carrot for his reindeer.
Another tradition at Christmas time is the hanging of mistletoe. Believe it or not, this tradition goes back to the days of the Druids - that is, long before I was a twinkle in my father's eye! It was supposed to bring good luck and ward off evil spirits. It was also used as a sign of love and friendship in Norse Mythology, and that's where the tradition of kissing under the mistletoe comes from. 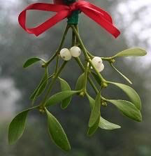 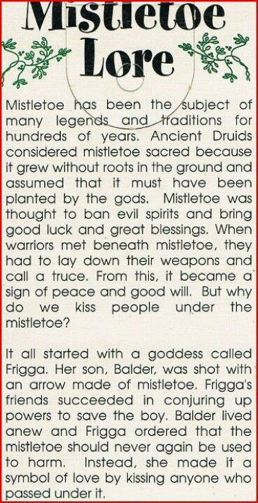 Mistletoe images courtesy of Pinterest.com
I hope all your preparations are going well for you at this very special time of the year, and I look forward to being with you again soon. Meanwhile, thank you so much for taking the time to drop in to read this Post.
Posted by Southhamsdarling at 14:09

HI Thisisme. I grew up on Mince Meat Pie. My grandmother in Kansas always made it at Christmas, and my mom would make it too. I didn't like it much back then...they would usually serve it with a dollop of whipped cream on top. And, now, I would love to have a piece of my grandmother's mince meat pie! I've never made it myself, I'm not very good at pastry baking. Your little pies look very yummy! And, I did enjoy your piece on mistletoe. I had read a bit about the Goddess Frigga. What an interesting history one little plant can have, and make a lasting impression on the world!

I would love to have your address to send you a card sometime. I've been wanting to ask you for it, but am a bit shy about that sort of thing.

Well, I guess I'll try to get some more Christmas stuff done. I decorated earlier than usual, (that's the joy of not working anymore, haha!) And, I'm hoping to make popcorn balls with Scooter, he has never had a popcorn ball. So, we'll see how that goes. Have a great day-I'll be in bed for the night when you get this! Hugs to you! ♥

Words cannot express how much I love your posts because we learn so much in your glorious details. Of course good old Pinterest comes in handy for the pictures. Personally Rocky and I do not decorate but I do enjoy seeing everyone else's beauty that is on display. I have no doubt that with your absolutely wonderful family you will indeed have a most wonderful Christmas and that makes me smile especially thinking of a certain grand daughter that you know I have loved from afar for many years. Have a great rest of your week and weekend knowing you have a friend across the "pond" that wishes I could give you a Christmas hug.
Odie

Hello again Suzanne. That was really interesting about your grandma and the mince meat pies. Wasn't that funny that we both chose The mistletoe to write about! 😊. Well, I have never heard of popcorn balls - that's a new one on me. I hope you manage to make them with that gorgeous little grandson of yours. This retirement thing is lovely, isn't it? Take care my Texan friend ❤️

Hi there Odie. You're right about Pinterest - you can find anything and everything on there, but I do like to use my own photographs as much as possible. I'm so glad that you have little Rocky for company over there. I hope he will be getting a little Christmas treat. I so enjoyed the photos of your little granddaughter on her first birthday. What a little cutie she is! ❤️ Thank you for dropping in from 'across the pond'.