I used to run a feature on my Blog called Sunday Snaps, where I featured a variety of photos that I had taken.
I have been thinking of a new feature and come up with the idea of Sunday Solace. Each Sunday I will publish some words that might make you smile or just provide some easy reading, and I hope you like the idea. 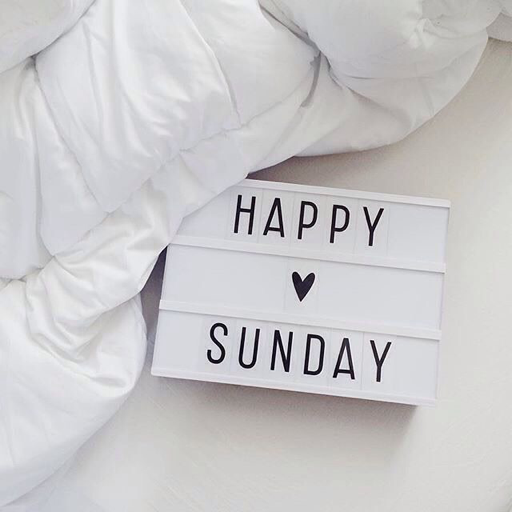 So then, onto the very first edition of Sunday Solace!  I have chosen the poem, "If I Had My Life To Live Over", which was written by the American writer and humourist, Erma Bombeck.
I hope these words will resonate with many of you ....
IF I HAD MY LIFE TO LIVE OVER....
I would have gone to bed when I was sick instead of pretending the earth would go into a holding pattern if I weren't there for the day.I would have burned the pink candle sculpted like a rose before it melted in storage.I would have talked less and listened more.I would have invited friends over to dinner even if the carpet was stained, or the sofa faded.I would have eaten the popcorn in the 'good' living room and worried much less about the dirt when someone wanted to light a fire in the fireplace.I would have taken the time to listen to my grandfather ramble about his youth.I would have shared more of the responsibility carried by my husband.I would never have insisted the car windows be rolled up on a summer day because my hair had just been teased and sprayed.I would have sat on the lawn with my grass stains. I would have cried and laughed less while watching television and more while watching life.I would never have bought anything just because it was practical, wouldn't show soil, or was guaranteed to last a lifetime.Instead of wishing away nine months of pregnancy, I'd have cherished every moment and realized that the wonderment growing inside me was the only chance in life to assist God in a miracle. When my kids kissed me impetuously, I would never have said, 'Later. Now go get washed up for dinner.' There would have been more 'I love you's' More 'I'm sorry's.'
I think what she was trying to say was.... stop sweating the small stuff, and concentrate on  what is truly important in our lives.
The following quotes are courtesy of Pinterest.com 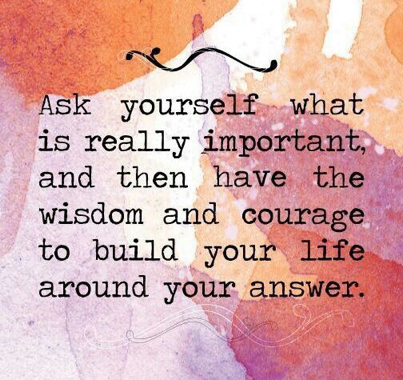 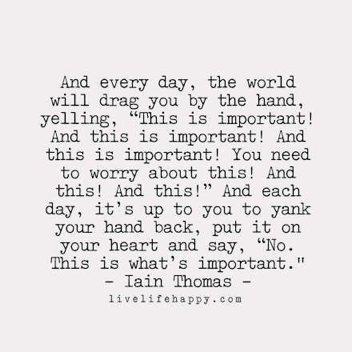 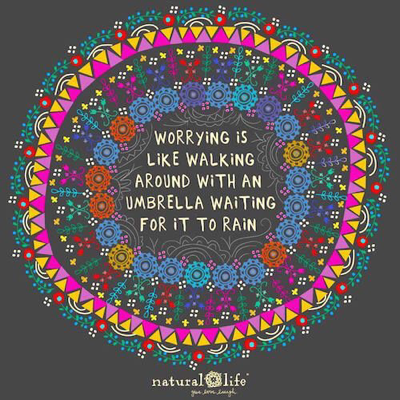 I hope you have enjoyed this new feature.  Have a lovely Sunday, and amidst the hurry and scurry, I hope you will find some time to relax.
Bye for now ....
Posted by Southhamsdarling at 08:53

Thank you. I needed this.

As always you amaze me with your creativity and it is a joy to be back into your wonderful blog.

Hi Diane
I'm glad to read your posts again, you always find the nicest things that makes you think of what's important, I enjoyed reading this poem. It is a very good reminder. I am having a relaxing day in my home town today and looking forward to have lunch with my sister tomorrow and to meet up with Malin, my daughter. We are going to work on a project together involving art and writing, it's very exiting. Enjoy your Sunday !

I'm glad it was if some use to you, Linda. Hope you're having a good Sunday.

Thank you so much for your kind comments, Odie. I really do appreciate them.

Aww, thank you so much, Eva. Really nice to see you back here today. Have a lovely time. It will be so good to meet up with Malin again, and the new project sounds very exciting!

Hi Denise / I did it! Thank you so much for taking the time to comment, and I'm glad you enjoyed this Post.

Hi Thisisme. Running late today, had my little Scooter and just got back from taking him home. Really enjoyed all of your words, especially how "Everyday the world drags you by the hand." I must work on that a bit for myself. I'm so glad to see you blogging again, and I hope it's proving to be rewarding for you! Have a great Monday, see you soon!

Welcome back, missed you :)

Hi Claudia. So lovely to see you here today. Thank you!

Hello Suzanne. I'm glad you enjoyed the post. That quote about Every day the Wirkd drags you by the Hand, is so good , isn't it? Hope you are doing well and have a nice week ahead planned.

Erma was the best! I loved her so. She spoke truth and she did so in a way that it made a difference. I'm glad you posted this as it will remind me to appreciate my time with Baby M. :) And the lovelies even though they're all grown now.

Oh so TRUE..Diane. Love the quotes too. We all need reminding of the smaller things in life now and again. Thanks for the fab post. xx

Empty Nester - Hi Pam. Thanks for coming over, and I agree with you about making that time. Yesterday, it was a lovely day, and the two little ones were at a party. My younger daughter sent me a text and suggested we go for a walk. I was doing things, but I didn't hesitate and said'yes' and had a lovely couple of hours with her.

Hello Anne. I'm glad you enjoyed the post. It certainly seems to have resonated with quite a few of us. Hope you're okay.

Hi Diane, I've enjoyed reading your new posts. I'm glad you're back. I may not always comment as I am busy with mum but I like to read everyone's posts and see how things are with them.

Hello Diana. Thank you for taking the trouble to leave a comment. I saw from your Blog that your mum was poorly, and I pray that she will be well again soon. Thinking of you.

I loved Erma Bombeck and this was certainly a beauty! Sunday Solace sounds pretty nice during such stressful times in our lives. Thank you for this.

Hallo there Bee Bee! Glad you could make it. Erma Bombeck was a special lady. Yes, I rather liked the idea of Sunday Solace. Hope I can keep it going!